Module: Dysphagia and the Digestive Tract

What tests are used to diagnose stomach problems? 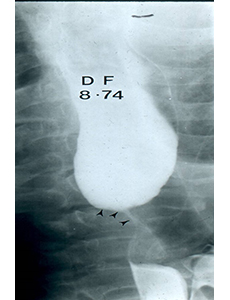 As described under the section on tests for dysphagia and reflux, a barium swallow allows a doctor to look at the outline of your stomach on an x-ray while you swallow a liquid with a substance called barium mixed in a drink. An x-ray is taken of your esophagus and stomach as you swallow the drink. The doctor looks for motility (movement) of the muscles, areas that may look narrow, and any sores on the lining of the stomach.

In this test, you eat a very small and safe amount of radiolabeled material with food (a sandwich or egg), and your stomach is x-rayed. The doctor times how long it takes the food to empty into the small intestine (bowel).

An endoscopy, which is described under the section on tests for dysphagia and reflux, lets a gastroenterologist find out whether or not you have “watermelon stomach.”